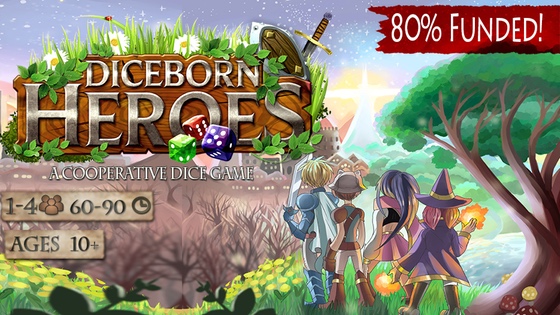 The Inventor is back at work, and the Copycat has crept into the party!

We have unlocked another class available for the KS Edition of the game. The Inventor! The Inventor class uses Dice on a seperate card to create invention cards, help targeting heroes hit more targets, gain shields and creates dummy bots to take hits. Dice there are locked but will give the other heroes the edge in battle.

The Copycat who no one understands has joined their party. On top of their weird language they also posess the ability to do any hero actions with the same value die, or copy their wounds onto other enemies. Their skill can also help heal some heroes when needed and use their hero ability to refresh others, When things have dice they are best done twice!

For people who are looking to go through the campaign and see how many starred cards they can survive with we have a page of gameplay Achievements! These Achievements will add additional stars to your end score and involve pulling off amazing feats, or bizarre game effects like Mimicking a Mimic, or Leaping as a dragoon on the dragon Hydralyx, as well as party composition bonuses or other thematic effects. These achievements will add some additional challenge for completionists who want to survive all the quests and get all the stars! Best of Luck!

I've been waiting on information and details for this stretch goal we reached 4-5 goals ago, It was one I was really hopeful for with the redesign of the hero cards it left us more space to take advantage of more detailed artwork. So I present the first redesigned artwork for the Priest:

Here is a photo of the 2 artworks side by side:

There is some logistic issues with doing 2 sets of artwork for the cards. You guys have been so supportive. So we are going to be offering the images for the new High Res hero cards for FREE as your new Hero artwork! For people who want the original artwork still, the original version will be available digitally, as a download option.

This is for all the help and support you guys have shown I wouldn't want to make something anything less than the best I can make.

We have a week to go so don't hold back yet! Until next time Heroes...

With the constant monster attacks every generation of Hero fights to save the world but what is the cause of the attacks? The truth will finally be revealed and the final fight will be fought. We are adding a sealed final boss only to be opened once you have completed all the other quests in the KS Edition of the game.

Retailers rejoice, we are setting up a Retailer pledge level where you will be sent a survey with BackerKit for orders of Diceborn Heroes KS Edition. You will be asked for your store info. Then you can purchase multiple copies.

We had a great showing at the MuseumCon and got to playtest the game with some younger kids and teens and give away promo dice. We had such a good reception that we are adding a variant to the regular play that is especially tailored for younger audiences and families. This "Diceborn Friends" variant will allow for each player to only need 1 hero and will not use quest cards or personal bounties instead your heroes just go through 3 waves of enemies to win the game, levelling up after each one!

Over the weekend after the 2 learn and play events we did we got the finished Dicetowers in for the Paladin and Summoner Pledge levels. We are extremely excited to see these hit the table. The green felt and the stained finish makes this piece something special for any battle in your quest. It folds up nicely and is compact enough that you can carry your dice in it and fit it in snuggly in the box.

That's it for now, I'm hoping to get some more info for the new art and playmats soon, until next time Heroes!...

Greetings Heroes, thanks to Tom Vasel who just gave us a shout out in current Kickstarters on the radar, it seems like a perfectly good time to talk about Dice Towers.

This is the idea we are using for our DiceTowers. Please keep in mind that the middle image was a test burn but it should give you an idea of what we're looking to do. The final product will be a hinged, stained collapsible dice tower with the logo on the outside and a different logo on the inside. Once the stain is applied the logo will pop. I will post another shot once I get one put together.

We also have info on the last two Heroes who joined our party. After painting a map of the land of Dievalice we have the Painter who comes to help add some color to our Kingdom:

Then rescued from the Monster Village located at the ends of the Kingdom the Vanguard returns the favor by protecting his allies in battle:

Thanks again guys, We will have more info in the next update coming soon. Until next time Heroes!

Hey guys it's been a few days since I left an update, I thought I would drop a line and let you know what I've got coming up! We are only 17 tweets away from unlocking the Bard class finally... We can make it happen with everyone's help.

With the last few updates we have added a bunch of awesome new bonuses for both the retail version and the KS version of Diceborn Heroes. First off we have custom dice that are going to be made up. Because the dice are such an integral part of the story and the game, it's going to be nice to get them done with style. With the dice being crystals that are used by the heroes I decided to go with a square cut look on the edges of the gems, now this is a rough mock up, the dice won't be perfectly square as shown but it is an idea of what we are thinking of going with.

We are opening up the Mage level tier one more time! Unfortunately the tokens won't be ready until January as we are already tasked with painting 23,000 tokens. They are still a nice touch to your copy of Diceborn Heroes if you don't mind waiting.

We are going to be doing learn and play events the next 2 saturdays so pop by and say hi and you can walk away with some cool promo dice!

We are also proud to announce we will be at GenCon International Game convention this August 17-20th, 2017. We will be showing off the game and meeting all the heroes who have come along with us in this journey.

I should have more artwork and info for you next update, until next time Heroes!.

What defines a hero is not their title but their character...

Thanks for all the support in the comments and messages. I've been working hard on some new cards, quests, and redesigned the Hero's card layout to make the artwork stand front and center for the card. I am now am working on setting up a new goal which will get Hero artwork redone by our artist in high resolution with all the bells and whistles. :) The new artwork will be an option for people who do like the original look they can keep the originals.

Talk about some of our KS Goals!

So there's a ton of questions about these goals that we have completed and haven't really had a moment to talk about so lets talk about what we got so far:

Player Mat: The Player mat will sit in the middle of the battle with a background for the task at hand, with a spot for the Active Quest or Boss, and monster cards. It will have the round summary on it and the spot for your attack deck. Working on the details of images and size but it will fit nicely in the box. :)

Oversized Cards: The large cards for quests and bosses will be 5.75"x3.75" and will fit in the box and fit sleeves for large sized cards.

Accompanying app: The app itself will be 5 original composed MIDI tracks and some custom attack SFX. that are optional for use in games of Diceborn Heroes. If there ends up being any other uses for the app it will be looked into, but it is not a required app, it's more of a fun thematic bonus.

Let me know your thoughts on the new card layout, and the new stretch goals! And we will see you on the next update!